I raised my child in a mall

I raised my child in a mall.

Not the genre of my youth: A dark-floored 1980s enclosed cave with a Spencer’s and The Limited, Orange Julius and Chick-Fil-A; a constant whoooooooshing fountain in the background.

No, this mall is a modern landscaping with a small fountain that people throw pennies into with doomed and prophetic wishes. It has every type of food imaginable, a bookstore, Best Buy, Chuck E. Cheese, and more boutiques and big name brands than anyone could ever buy in a day.

All of this comes to mind as my 19-year-old daughter, Isabel, prepares to graduate from college. She was raised in a mall, I believe. I did it!

I often tell him that his life would be excellent material for a children’s book. Eloise level fantasy. How many kids, I ask, end up living in a mall?

To be clear, we didn’t live in one of the stores. It would be both wonderful and ridiculous. We live a few yards away, however, in a condo complex in Tuscaloosa, Alabama, where we still live.

The problem with that, I’ve noted often, is that when you live within walking distance of an ice cream shop, a cupcake shop, and a chocolate shop, the temptation is to walk there all time. We didn’t do that and instead often ended up walking two minutes to the bookstore and spending whole mornings and weekends there. It is still our sanctuary.

At the start of the pandemic, we went window shopping, thinking about the clothes we saw and the events we might wear them to, if there was somewhere we could go. How lucky we are! we would say, having so much to look at when the world has stopped in time. Many people have only their house, grass and trees.

We have a kingdom.

Isabel has always been funny. Years ago, she cradled a giant sandwich like a baby, in front of the mall stores, just steps from our condo. That made me laugh.

We landed at this location right after the super tornado outbreak of 2011 destroyed our home. Nearly 30% of our town was also gone and the rush for rental housing has been an uphill battle since we live in a college town.

I managed to find this condominium, as I told a stranger friend of a friend – who had a condo for rent – through tears, that “I”. sob and gasp “Need”. sobbing and pausing to control the shaking voice “To get. My child. Out of a hotel. And into a real house, even though I haven’t stopped to consider that living in a mall is not, in fact, what most people would call a real home.

And that became part of our problem.

“You should live in a house!” people would tell me. “She needs a field to play!” said her father, my ex-husband, shocked, as if I were raising him in an alley behind a strip club.

I hesitated and hesitated, tried to explain my actions and defend them, all the while feeling that something was wrong. After enough of that, I identified it and it was one word: should.

RELATED: Kids With Low Self-Esteem Get It From Their Parents, Says Science

I was an English major in college and I teach language and publishing to students. I often think about words and their meanings. But the word “should” crept into my subconscious, opened a tent and camped out before I even knew she was there.

While people were telling me what to do, Isabel and I were living our lives. We had so much fun!

We swam in the condo resort pool, had lots of clubhouse parties, played on the mini putting green, and pretended to work out in the practice room as we played with medicine balls and run on the treadmills.

We walked around our neighborhood including the mall stores. We discovered every tree and every flower in the area. We watched neighbors walking every type of dog imaginable and even a few cats. We got to know the wanderers of the neighborhood. We played ball in the yard. We have created our own games. On rainy days, we walked through the various linked parking lots.

We walked to the roof to admire the city or spot the football stadium. Sometimes we looked at the stars. The few times it snowed, we ran breathlessly to the rooftop for a bird’s eye view of the beautiful snow-capped southern city. 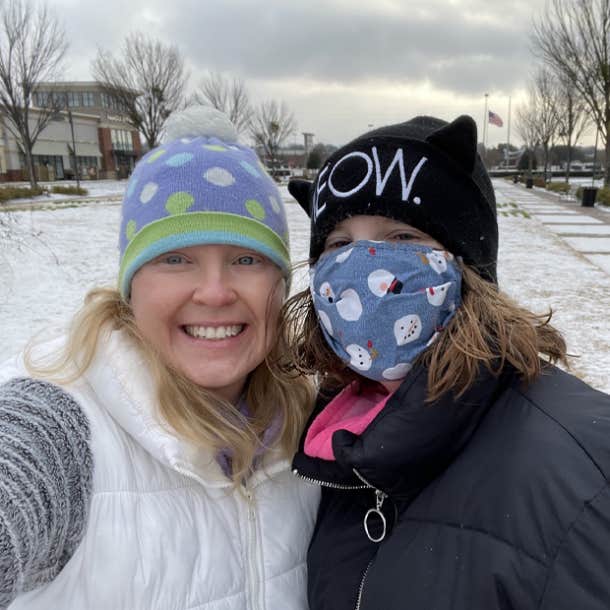 Isabel and I in 2021 after rare snowfall, outside our condo.

After the tornado brought us home, nothing was the same. I walked Isabel, then 9 years old, to the tree outside the mall in about 30 seconds. (We didn’t have a tree yet because ours got crushed in the garage.) 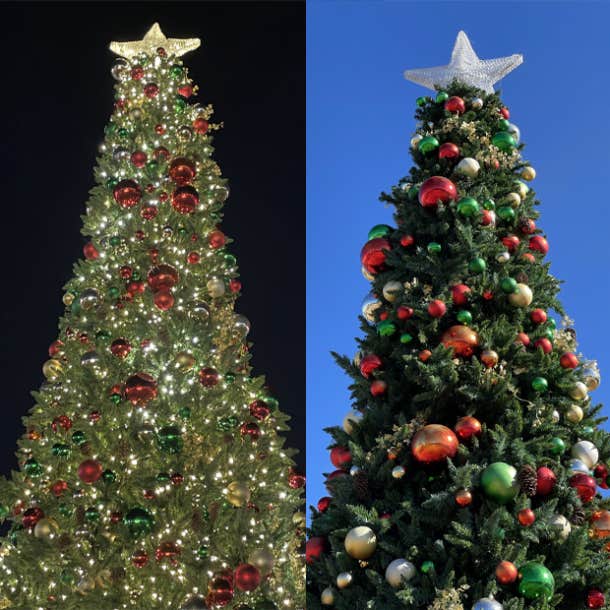 The tree outside the mall has become “our” tree.

Close your eyes!” I said. When she opened them: “It’s our tree this year,” I told her. She was amazed. Last Christmas, we went back.

Advertising Are you tired of yelling at your kids? We understood. Sign up for this FREE course today and see results in days.

We’ve been on really long road trips motivated, I’m sure, by the fact that living in a mall snow globe can make you want to travel once in a while. We have seen the country. Almost all.

RELATED: 4 Simple Ways To Become Much More Charming, According To Science

Sometimes when we were in a remote place, like a desert or a national forest, we longed for our home.

“I miss being around stuff,” Isabel said, emphasizing “stuff”, having gotten used to being a mile from everything in our world. Other times, being away from the 50% off everything signs was a welcome reprieve.

In this place, we recovered from the trauma of the tornado and survived a brutal divorce and a pandemic. Isabel was diagnosed with autism and became bisexual. In this place, she and I have won awards for various talents. I homeschooled her here. We lost two close friends and an acquaintance to suicide.

In this place I learned to be a good teacher and have taught thousands of K-12 and college students. I wrote. We have lost a beloved pet. I got lost and found many times. I have written others. She started a global organization of young activists.

I raised a child with a good heart. My kind-hearted child gently pushed me to expand my life in this place; this little condo in a strip mall.

As she prepares to graduate, I watch her work on her final homework for college, cocooned in her bedroom, away from the maddening “Weekend Sale!” crowds still a few steps away.

The word “should” is the enemy of all good things. That’s what I teach him. When someone says you should do something, ask yourself why. Question the value of the person who tells you this. Challenge the word should, always.

Still, we had the time of our lives here. Memories were made in the little moments that turned out to be nothing short of small.

I raised my child in a mall. If I could do it again, I would.

More for you on YourTango:

Meredith Cummings is a journalist and professor of academic journalism whose work has appeared in media around the world. Visit her blog, Woman of a Certain Rage, her website, or follow her on Twitter.

This article originally appeared on Medium. Reprinted with permission from the author.